Zug, Switzerland and Vancouver, Canada – HIVE Blockchain Technologies Ltd. (TSX.V:HIVE) (OTC:HVBTF) (the “Company” or “HIVE”) today announced its results for the third quarter ended December 31, 2017 (all amounts in US dollars, unless otherwise indicated).

Subsequent to the quarter, on January 15, 2018, HIVE commenced mining operations from the initial 6.8 MW phase of the Sweden GPU Data Centre, nearly tripling its global footprint of energy consumption dedicated to digital currency mining to 10.6 MW. This has contributed to a strong increase in the Company’s digital currency portfolio to a total value of $13,624,783 as at February 26, 2018. The construction and configuration of the second and third phases of the Sweden GPU Data Centre is proceeding on-schedule and will increase HIVE’s capacity by an additional 13.6 MW within two months, with the 20.0 MW Sweden Bitcoin Date Centre to follow by September 2018.

“In the third quarter of Fiscal 2018, we made significant progress in our expansion plans,” commented Harry Pokrandt, President, CEO and a Director at HIVE. “The Company’s second acquisition in Iceland commenced operations, contributing to rising mining revenues and margins, and a transformational 2018 build-out schedule was finalized and fully financed, which will see a more than ten-fold increase in energy consumption dedicated to mining activities compared to that which was operational at quarter-end. We continue to evaluate future mining sites in stable jurisdictions with access to reliable, clean and inexpensive power.”

In the quarter, HIVE acquired and launched operations of the second phase at its digital currency mining centre in Iceland. Included in the financial results for the quarter ended December 31, 2017 is a full quarter of operations from the initial 2.05 MW of mining capacity plus operations from the 1.75 MW expansion from October 13, 2017 which, combined, resulted in revenues of $3,274,186 and a gross mining margin of $2,382,687 (see Note 1).

Operating and maintenance costs for the three and nine months ended December 31, 2017 were $891,499 and $949,359, respectively, consisting of fees paid to Genesis under a master services agreement between HIVE and Genesis, which includes electricity, daily monitoring and maintenance, facility costs and all other costs directly related to the maintenance and operation of the Company’s mining equipment.

HIVE continues to execute on its aggressive growth strategy to maintain its position as a market leader in the blockchain infrastructure industry and is fully financed to build out and bring online the balance of the Sweden GPU Data Centre by April 2018 and the Sweden Bitcoin Data Centre by September 2018. 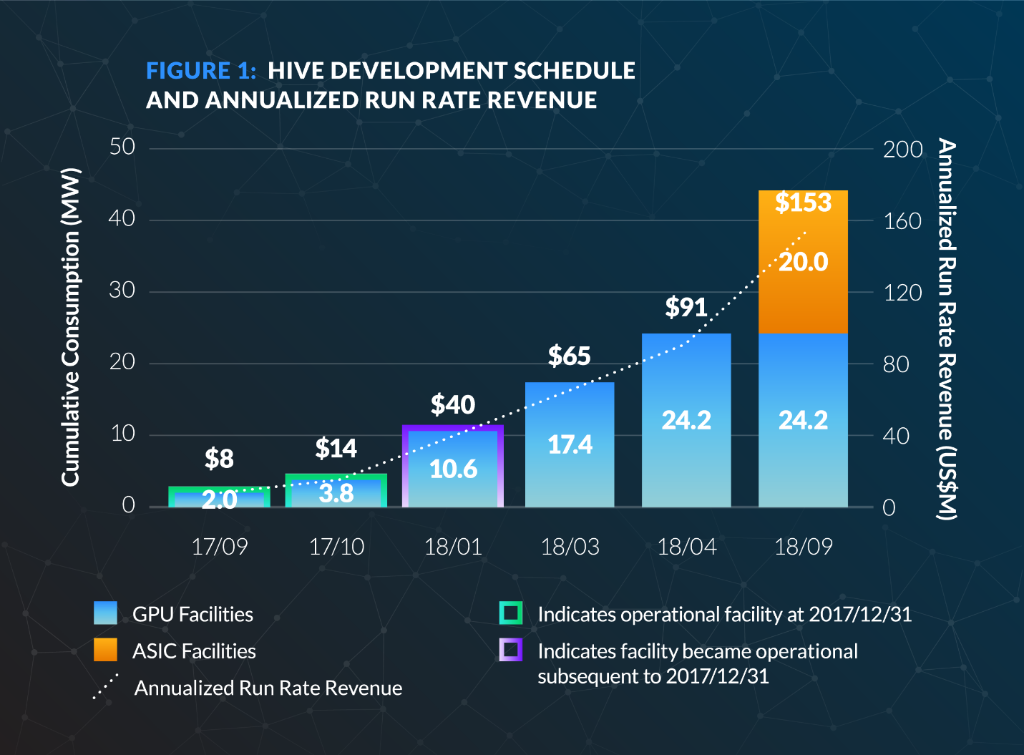 Annualized Run Rate Revenue: The Company uses the annualized run rate revenue to provide a measure of the financial performance of the Company using current financial information at a point in time. The annualized run rate revenue is a snapshot of the Company’s potential revenue extrapolated over a period of one year, based on current assumptions as stated. The Company is not making projections on the future digital currency prices, network difficulty rates and network mining rewards and the annualized run rate revenue is not necessarily indicative of the Company’s future earnings. The network hashrate (or ‘network difficulty’) is the measuring unit of the processing power of the entire network for a specific algorithm (for example, Bitcoin or Ethereum).  The daily network mining rewards are the total daily rewards issued for the blocks solved that day; daily network rewards are fixed based on the specific algorithm. Actual results will vary based on change in these assumptions. As at February 26, 2018, the Company utilized the following assumptions:

“HIVE and our strategic partners, Genesis, are leading the development of the infrastructure needed to power the expanding global blockchain ecosystem,” said Frank Holmes, Chairman of HIVE Blockchain. Genesis’ innovative hardware and software tools enable us to run highly efficient mining operations, which directly feeds into our annual revenues. We started HIVE with a vision to go from a revenue run rate of $1 million per month to $1 million per week and now, by September 2018, HIVE’s annualized run rate revenue is over $150 million, or $3 million per week.”

The Company’s Financial Statements and Management’s Discussion and Analysis (MD&A) for the three and nine months ended December 31, 2017 will be accessible on SEDAR at www.sedar.com  under HIVE’s profile and on the Company’s website at www.HIVEblockchain.com.

Management will host a webcast on Thursday, March 1, 2018 at 5:30am Pacific Time/8:30am Eastern Time to discuss the Fiscal 2018 Third Quarter financial results. Presenting on the webcast will be Harry Pokrandt, CEO, President and Director and Jessica Van Den Akker, Chief Financial Officer. Analysts and interested investors are invited to participate.

Click here to register for the webcast. The webcast will be archived for later playback on HIVE’s website.

HIVE Blockchain Technologies Ltd. is a growth oriented, TSX.V-listed company building a bridge from the blockchain sector to traditional capital markets. HIVE is strategically partnered with Genesis Mining Ltd. to build the next generation of blockchain infrastructure. HIVE owns state-of-the-art GPU-based digital currency mining facilities in Iceland and Sweden, which produce newly minted digital currencies like Ethereum continuously, and provides shareholders with exposure to the operating margins of digital currency mining as well as a growing portfolio of crypto-coins.